What Are Killer Wasps and How to Deal with Them

Have you ever seen a giant beeattacking a cicada first-hand?! Despite its looks, this is most likely not really a giant bee…

This species is called killer wasps. Pretty scary name, right? Killer wasps, or the so-called Cicada Killer Wasps, are not a type of cicada. They actually KILL cicadas!

An adult female wasp paralyzes the cicada with her venomous sting. The wasp then carries the cicada to its burrow, laying an egg under the left or right second leg of the cicada (so specific!). When the egg hatches, this killer wasp’s larvae begin to eat the cicada for nourishment as they grow! 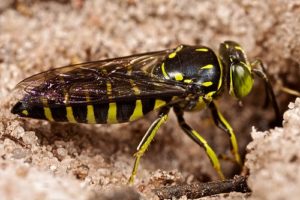 Yes, these wasps are HUGE. But thankfully, they usually ignore people as they go about their business of digging holes and hunting for cicadas.

A mound of fine soil surrounds the burrow of each female killer wasp. Since colonies of burrows are common, infested lawns usually contain several mounds that can smother the grass. They prefer, however, to nest in areas of sparse vegetation and rarely infest thick, vigorous turf.

Each killer wasp burrow includes several cells where larvae are raised. Each cell is furnished with at least one to three cicadas and a single egg before being sealed off.

Male killer wasps, on the other hand, establish territories near nesting females and aggressively defend their territory from other intruding males. The eggs hatch in 2 to 3 days, depending on the number of cicadas in its cell, and the larva feeds for 4 to 10 days until only the cicada’s outer shell remains!

***It is important that you do not aggravate killer wasps. Do not push or poke them, do not walk on them and do not attack them with anything.***

If you are bothered with killer wasps, it’s best to contact a trusted pest professional as soon as possible, rather than trying to remove on your own. Give us a call today for a free no obligation inspection!