in Cicadas Bees and Wasps
They’re big, they buzz, and they’re back!
They look mean. Even their name sounds menacing. No wonder so many people are alarmed just by the sight of the big, buzzing cicada killer wasp. 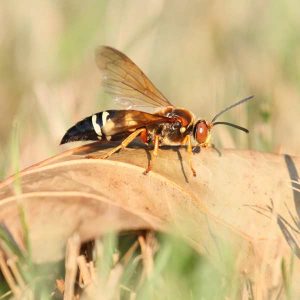 Rest easy, though. While they look scary, killer wasps are not typically dangerous—unless you’re a cicada. That (as the name implies) is what they’re after. But since cicada killer wasps are so numerous in the summer, and since they’re so often confused for the more dangerous hornet, knowing how to spot and potentially control them may come in handy.

How do I identify cicada killer wasps?

July and August are when cicada killer wasps are most active, hunting the dog-day cicadas, which they feed to their larvae. Their size, markings, and buzzing sound are all designed to intimidate. And though at first glance they can resemble a yellowjacket or hornet, there are several characteristics that set the cicada killer wasps apart.

When do cicada killer wasps become a problem? 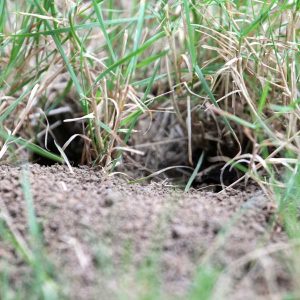 Are there control methods for cicada killer wasps?

Given that the wasps prefer loose soil in full sun, homeowners can try tactics such as adding shade, deepening mulch piles, and regularly churning any sand or loose earth to discourage females from nesting. Growing a thick layer of turfgrass can also discourage nesting and can eliminate an infestation within a few years.

An insecticide treatment can be effective if applied to the opening of each nest, though dust has provenmore effective than sprays, and repeat applications are often required. Having your property checked regularly as part of a pest prevention program can help ensure that cicada killer wasps or other pests don’t become a problem. Avoiding an infestation begins with proactive inspection and regular treatment.

To learn more about treating cicada killer wasps or about a general pest prevention system, call A-1 Able Pest Doctors at (800) 737-8189.