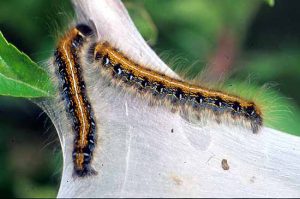 To many, Winter in Ohio is considered milder than the average winter temperatures in other states. A number of questions have been presented about the coming winter; people are wondering which pests will be bugging them as the cold approaches.

In the summer, when temperatures are high, some insects may die because their cellular activity is moving so fast due to the heat. In the winter, insects seek shelter from the cold and produce compounds in their bodies. It is not the cold temperature, but the freezing or thawing processes that usually causes an insect to die.

Instead of relying on finding a protected location to hibernate, some insects prepare for Winter by making their own protected covering.

A perfect example is the Eastern Tent Caterpillar (Malacosoma americanum) moth that produce eggs which appear to be surrounded by bubble wrap. This bubble wrap provides an insulating protection against the cold temperatures.

Some insects don’t die because of the freezing and thawing process created from the cold weather, but rather from the sharp-pointed ice crystals that destroy cells that kill the insects. Isn’t that wild!?!

Some insects are actually able to dodge the winter by using several strategies like diapause. Diapause is a physiological state similar to, but deeper than, hibernation. Basically, an insect’s metabolism slows down and doesn’t return to normal, until some certain environmental cue tells the insect that it is time for it to come out of diapause.

Here’s the official definition of ‘diapause’ for those wondering: a period of suspended development in an insect, other invertebrate, or mammal embryo, especially during unfavorable environmental conditions.

Even though we can’t 100% accurately predict what will be pesky this winter, we can guarantee that we are equipped and ready to help you rid your home of whatever might be moving into your place during the cold months.

Call us today to talk to us about making your home pest free all winter long!