Fall: Prime season for stink bugs in your home

in pests in your home Earwigs and Stink Bugs

There are so many things to love about the fall season…but the increase in the stink bug population isn’t one of them.

Why couldn’t we have an increase in butterflies, dragonflies or hummingbirds this time of year, instead of the insect world’s version of the skunk?

When they are disturbed or crushed, stink bugs release an odor that smells a lot like stinky feet. So, learning that fall is their peak season for invading homes in high numbers is quite disturbing. 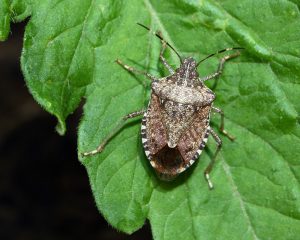 Stink bugs characteristically deposit their eggs on the underside of leaves in clusters. This stink bug was found on the leaf of a young tomato plant.

Peak season of a population on the rise

The brown marmorated stink bug (BMSB) is an invasive insect from Asia that was accidentally introduced into the U.S. near Allentown, Penn., in the late 1990s. Since its discovery, the BMSB has expanded its range to 41 U.S. states and Canada.

Stink bug populations in the U.S. have been steadily increasing, thanks in part to the overly wet winter and spring months, according to the National Pest Management Association (NPMA).

In the fall, stink bugs make their way into homes in preparation for the upcoming cold weather months. They hunker down in the attic, crawl space, or even a crack in the wall, eventually emerging from hiding in the spring as they head back outside to begin feasting on your plants.

While stink bugs don’t pose a threat to humans, their sheer numbers and smelly odor can be quite a nuisance. 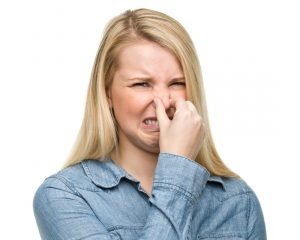 Portrait of a young woman on a white background.

Identifying a stink bug can be a multi-sensory experience

If you’ve ever had the unfortunate experience of squashing one of these creatures, you undoubtedly learned rather quickly how it got its name. The unpleasant smell that permeated the room immediately after ensures that you’ll never forget what a stink bug looks like.

But in case you haven’t encountered these little stinkers, they are brown and oval or shield-shaped. They have six long legs extending out from their sides, which attributes to their deceptively large appearance. They are, in fact, relatively large, as their width is almost the same as their length.

Tips for preventing a stink bug invasion in your home

The following are some helpful tips for preventing stink bugs from “holing up” in your home: 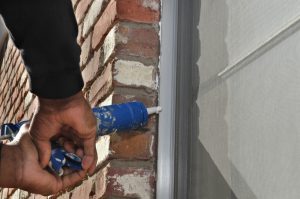 Remember that A-1 Able can thoroughly pre-treat your home for stink bugs in the late summer or early fall before their full maturation and congregation.

Already spotted some in your home?

If stink bugs have already found a way into your home, use a vacuum cleaner to eliminate live and dead bugs. However, make sure to immediately empty the vacuum cleaner, seal the contents in a plastic bag, and dispose of it with your normal garbage. This will prevent the nasty odor from escaping into your home.

If you suspect that a full-blown infestation has developed inside your home, contact A-1 Able Pest Doc at 1-800-737-8189 to evaluate and assess the severity of the problem, as well as identify the access points where the bugs may have gotten in.