Are there venomous spiders in Ohio? 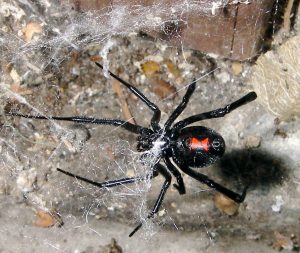 As you put up Halloween decorations and prepare for trick-or-treaters, make sure to keep your eyes peeled for some real creepy crawlers that could be lurking around your yard and home.

Ohio is home to more than 620 species of spiders…and all of them are venomous, except for one.

The good news is, most of the time, spiders are not harmful to humans or pets, since the amount of venom they possess is minimal.

Spiders have eight legs and two fangs, and they serve an important role in keeping other pest populations under control. However, there are two kinds of spiders in Ohio that can cause serious harm to humans and pets: recluse spiders and widow spiders. 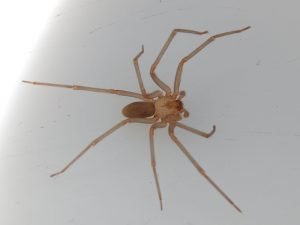 Recluse spiders are pale brown to reddish-brown in color, have six eyes instead of the typical eight, and have distinct long, thin, wide-spread legs that enable them to move forwards, backwards, and sideways.

The brown recluse and Mediterranean recluse are both found in Ohio.

Recluse spider bites usually occur when spiders have crawled into an article of clothing thrown on the floor, a pair of discarded gloves, or a cardboard box. When a human pulls on the item of clothing, places their hand in the glove, or lifts the box, the spider is threatened and bites.

The bite of a recluse spider is usually not painful at the time, but pain can become severe after a few hours. A recluse bite also can be life-threatening if the victim is a young child or elderly. These bites contain a hemotoxic venom that potentially can lead to death of nearby tissue, so medical attention is recommended for a slow-healing bite. 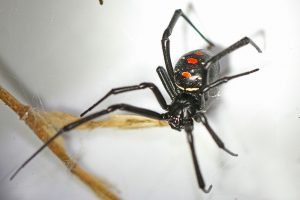 Southern black widow spiders are usually found in abandoned structures, barns, and wooden outbuildings. Northern black widows can be found in logs, shaded areas of woods, under rocks, and in under-croppings of cliffs.

The bite of a widow spider is similar to a recluse in that it isn’t particularly painful when it happens—likened to a needle prick. But within hours, the venom causes the victim to suffer from muscle spasms and cramps. In healthy adults, complete recovery can be expected. 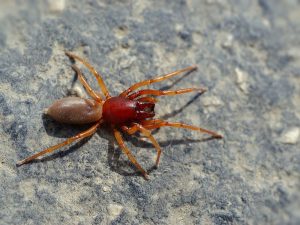 There are a handful of other species of spiders in Ohio that may bite, but these bites typically have no lasting effects. These include:

It’s often difficult to diagnose a spider bite, since the fangs rarely leave a visible puncture wound. In true spider bites, the puncture marks from each fang are so close together that the tissue damage makes it appear as one wound. Many wounds, particularly bacterial infections and stubborn blisters, are commonly mis-diagnosed as spider bites. If you suspect you’ve been bitten by a spider, you should seek prompt medical attention.

Even if you haven’t spotted a recluse or widow spider on your property, preventative treatments can be administered to keep your home safe. If you have an infestation of any kind of spider, A-1 Able Pest Doc can professionally and safely exterminate their presence. For a quote on protecting your property from spiders and other pests this fall, call A-1 Able Pest Doc at 1-800-737-8189.