5 things to know about paper wasps 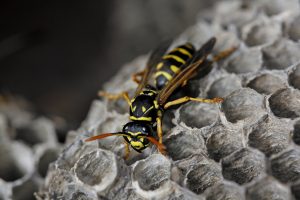 close up of single wasp among paper hexagon cells.

Ohio is home to thousands of species of bees and wasps. As you venture outside this spring, you are more likely to cross paths with some more than others.

Paper wasps build their nests in residential homes, yards and gardens, community parks, and even barns and structures in rural areas. One reason in particular to watch out for paper wasps? They pack a mightier sting than your average sweat or honey bee.

Since the paper wasp is one of the most common stinging insects in southwest Ohio, we’ve rounded up five things you should know about them…

1. Paper wasps are commonly mistaken for bees or yellowjackets. Both wasps and bees have four wings, long antennae, chewing mouthparts and a stinger. However, wasps are hairless and smooth, while bees are typically covered with hair. It’s a lot more difficult to tell if you’re dealing with a paper wasp or a yellowjacket, though. The single biggest differentiator is that paper wasps have orange antennae, while yellowjackets have black antennae. It’s unlikely you’ll be able to get close enough to spot that feature, as paper wasps tend to shy away from human activity, except when their nests are located near high-traffic areas. Yellowjackets are far more aggressive, defending their nests when disturbed. 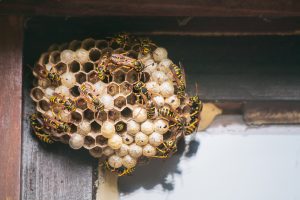 Wasps in action working on building their nest in the corner of house window. Live nest with cacoons, larvae and lot of wasps.

2. Paper wasps are master builders. Paper wasps chew wood, mud, and other materials to make a pasty pulp, which becomes a paper-like substance, to build hanging nests. These wasps search for protected spaces to build nests, such as under eaves of buildings, porch ceilings, tree branches, natural rock formations, attic rafters, shrubs, roof overhangs, under decks, joists, and railings, and off of window and door frames. They also build nests in enclosed spaces like electrical boxes, inside bird boxes, and within overturned flowerpots.

3. They can sting multiple times. Unlike most kinds of bees, paper wasps can sting more than once; however, only female paper wasps can sting. Paper wasps do not spontaneously attack people, but they will sting if aggravated or threatened. Stings typically occur when people unknowingly come across a nest hidden within trees or bushes. The paper wasp sting rates a “2” on the Schmidt Pain Index and has been described as “caustic and burning… like spilling a beaker of hydrochloric acid on a paper cut.”

4. Paper wasps are pollinators. These wasps are great for the growth and health of flowers and help gardens as they feed on nectar and pollinate flowers. If paper wasp nests are in natural areas away from homes and structures, where they do not pose a threat to people, they should be left alone for the benefit of plants and gardens. 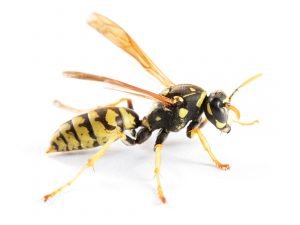 5. They are social creatures. Up to 100 paper wasps can reside in a single nest. After hibernating through the winter, female paper wasps emerge in the spring and establish new colonies. If you spot multiple wasps flying in a centralized area in or around your home, or other structure on your property, look for protected places close by where a nest may be. If nests are located in an area that poses danger to you or other people, it is best to have them professionally removed to eliminate danger to you and others and to discourage future nests in the same vicinity.