What the heck is a boxelder bug?

in pests in your home Yard Pests Beetles and Cockroaches

In the summertime, you probably don’t even notice them. During the warm weather days of spring and summer, the boxelder bug, Boisea trifittattus, quietly lives and breeds in boxelder and silver maple trees. Although they feed on the leaves, flowers and seed pods of these trees, they generally don’t cause any noticeable damage. 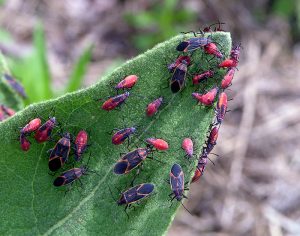 It’s when colonies of hundreds, even thousands, enter your home that the problems begin.

1. How do I know if the bug in my house is a boxelder? About a half-inch long, adult boxelders are black with three red stripes and red lines along the edges of their wings. When their wings are lying flat, their markings make it appear as though their wings form an upside down “V”.

2. Why do they invade peoples’ homes? In the fall, as boxelder bugs begin to seek shelter for the upcoming cold months of winter, they’re attracted to the warm, sunny sides of homes. From there they slip between gaps and cracks in the siding, around doors and windows, etc., often ending up inside the home during the winter. That’s why it’s important to regularly screen or caulk all cracks, crevices, gaps, and openings in your home; repair torn or broken door and window screens; and ensure that doors and windows are well-sealed.

3. What happens once they’re in the house? Boxelders will make themselves comfortable in the walls of your home and/or a warm basement. They can detect temperature differences of as little as one degree, and for that reason, sometimes they emerge in bedrooms, kitchens, living rooms and other human-inhabited spaces. And just like stink bugs, they give off a pungent odor when 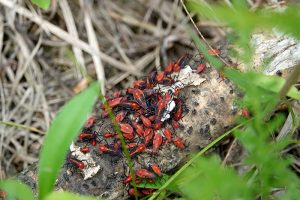 A swarm of boxelder bugs (Boisea trivittata) on a log in summer.

4. Will these bugs bite me or my family? No, boxelder bugs do not bite, sting or carry disease.

5. Will boxelders cause damage to my home? Boxelders are primarily a nuisance pest. They do not breed indoors, only live for a few days, and do not infest food or cause property damage. However, when a lot of them get into your home, they can be very intrusive and annoying, and their excrement can stain surfaces such as walls, furniture, and drapes.

6. How do I get rid of boxelders that get into my home? If a boxelder bug infestation is suspected, contact one of our licensed and trained inspectors to evaluate and assess the problem.

In the meantime, a few options for physically removing any boxelder bugs you find your home include: