Every year at this time we receive several calls from homeowners and commercial accounts about sudden and unexplained pest(s) movement in and around their structures. Pictured here is the Carpenter ant Camponotus pennsylvanicus. These ants form satellite colonies inside bored cavities of your home or business structure. They can be extremely active in the winter months as they are cut off from their exterior domain due to frigid temperatures. However, these insects can be found year round in the home and can be a serious structural pest problem. If you spot this pest you will want to call A-1/ABLE Pest Doctors for their famous NO OBLIGATION inspection/diagnosis visit.

In the winter months several other overwintering insects and rodent pests make their home in your home. With the start of longer daylight hours many of these invaders start to move about as their circadian clocks are telling them Spring is just around the corner.

One major pest problem is the Cluster fly (Pollenia nudis). This large black fly with golden hairs on its thorax is spotted in recessed lighting and around windows as it is attracted to light. In a false belief it is moving outdoors it moves into your living areas from wall recesses and attics in mid winter. This fly incubates in the belly of the earthworm around your structure. This pest can be prevented and remediated with proper building sealing and exterior prevention in the Fall months. Vacuuming up these insects is the easiest way to remove them from your property once they invade your living spaces. 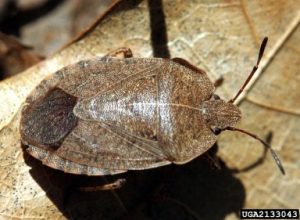 Another recently introduced insect pest in Ohio is the brown marmorated stink bug (Halyomorpha halys). The word marmorated describes the chelation or checkered appearance of the perimeter of its thorax as seen directly above from the dorsal view. This voracious plant and vegetable feeder invades building in massive numbers and crawls into our living areas. If crushed they emit a foul pungent rotting smell thus the origin of its name. DO NOT CRUSH THIS INSECT. You can safely remove it with a tissue and a flush of the toilet or, if in large numbers, a vacuum that is later emptied into a plastic bag or outdoors can be useful.

Other nuisance overwintering pests include the beneficial lady bug or lady beetle species. These are the bright to somewhat dull orange colored round beetle with various spots on its backside of the thorax region on its wing covers. This beetle belongs to the Coccinellidae family which has more than 6,000 species. Most folks believe there is only one or two types of ladybirds as the British lovingly named it. This insect is beneficial in that it devours plant destroying aphids. However they can enter a structure by the thousands and trespass into human occupied areas causing great discomfort just by their presence. Once again sealing of the afflicted structure along with preventative pest control measures in the Fall months will stop most of this problem invasion. Once in the home you can either battle to try to vacuum them up or you can rely on the ALLTRA YEAR ROUND PROTECTION program, exclusively provided by A-1/ABLE Pest Doctors, to prevent and eliminate all invading pest problems.

House Mice (Mus musculus) are not cute fur bearing pleasant pests. Mice contaminate grain and processed foodstuffs with their constant urinating as they nosily explore new areas and food sources inside your home or business. Imagine having dried mouse urine on your countertops where you fix your family meals. They are known carriers of diseases and parasites that are transmittable to humans. A mouse infestation will require a thorough inspection to determine how they are entering a structure and where they are nesting to trap and remove them from the premises. There is no charge to have a Pest Doctor licensed technician to evaluate and exterminate your mouse problem.

For all other overwintering pests including spiders, wasps and crickets found in various parts of your home or business structure including attics, crawl spaces, wall voids, firewood and hidden voids please call the pest experts at Pest Doctor Systems. We’ve protected homes and businesses for almost eighty (80) years since 1936. Remember: “All Our Patients Die”.